Amazon Web Services is arguably Amazon’s second-greatest creation, after the construction of a retail empire that has done so much to influence the way just about everything is bought and sold. But if the parent is holding back the child, it’s time to let go.

First it was Walmart, then Target: Amazon’s retailing rivals, having squandered years dismissing the impact the company would have on their businesses, have come out swinging in 2017. They’re fighting the fire by cutting off Amazon’s oxygen, reportedly pulling their cloud computing business from AWS and encouraging their suppliers to do business with other cloud providers.

It’s a strategy that could make AWS CEO Andy Jassy wonder if the Uber gig wasn’t such a bad idea. It’s not at all clear how much business Target and Walmart’s suppliers are doing with AWS, and it’s not that easy to just move out of a given cloud, so these moves could just be warning shots to Amazon CEO Jeff Bezos amid his relentless expansion into just about every commercial activity.

But if Amazon’s retail strategy actually begins to hurt the ability of AWS to retain big important customers that compete with the rest of Amazon — a category that grows by the month — it may be time for Amazon to spin off AWS into a separate cloud-focused company.

This is not a new idea. Wall Street has been pleading with Amazon to make such a move for years, hungry for the boost Amazon shareholders would get from such a deal. Some estimates believe a separate AWS could be a $160 billion business on its own, which isn’t nearly as big as Amazon itself, but isn’t exactly small: based on market cap, Oracle is a $207 billion business, HPE is a $29.3 billion business, and Boxis a $2.5 billion business.

AWS occupies a far more future-proof slice of the computing world than any of those companies do. Morgan Stanley’s Brian Nowak told attendees at our Cloud Tech Summit in June that AWS might actually be worth more than that, with a not-crazy bullish case based on the growth of cloud computing in general that AWS might actually be worth $239 billion.

Of course, there are lots of very good reasons why Amazon hasn’t gone down this road.

A decent chunk of Amazon’s overall market value assumes that AWS, the most profitable of the divisions the company reports, will remain part of the overall company. Amazon’s revenue gives AWS the capital to invest in world-class infrastructure and artificial intelligence teams. This is the same way Microsoft and Google’s main businesses subsidize the growth of their cloud businesses, and it could be much harder to make those same infrastructure investments on its own. Even bullish estimates for AWS revenue fall short of $20 billion this fiscal year, while Amazon overall is expected to take in twice that amount during the current quarter. 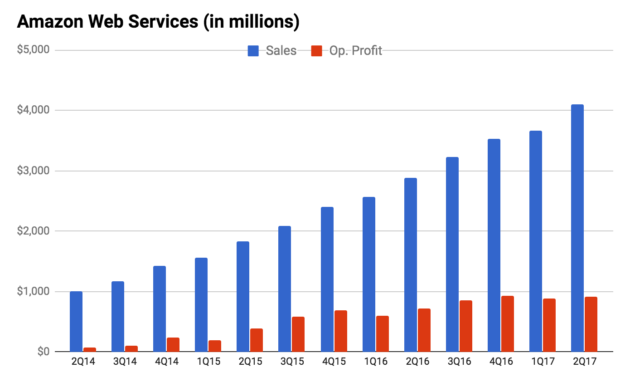 Spinning off something so tightly integrated into Amazon’s overall operations would be a demanding, and potentially distracting, logistical task. And Amazon is acutely aware of the valuable performance data that a really large company can extract from running its workloads on its own infrastructure.

This equation changes, however, if AWS customers that currently compete with Amazon or fear that they might soon compete with Amazon start to decide they’re better off spending their money with a company that isn’t trying to destroy their business. AWS may have kicked off the cloud computing revolution, but Microsoft and Google have the tech chops to offer competitive alternatives, especially if you’re looking to the cloud as the home for just a subset of your overall workloads.

After all, why should media companies like Discovery Communications and Hulu continue to run their workloads on a service that benefits a company competing directly with their entertainment products? Why should retailers like Seattle’s own Nordstrom and the U.K.’s Shop Direct give AWS money to help power retail businesses that Amazon would love to own?

And if you’re a retail, commerce, or logistics startup with plans for an empire of your own, why would you consider giving your hard-earned venture capital to a company that’s inclined to stomp on your neck the minute you prove you have a viable business? There are lots of companies that compete with their suppliers, such as Apple, which spends millions with Samsung on memory chips and displays, but that’s mainly because phone makers don’t have an easily available alternative for those products. Cloud customers do; as noted above, moving between cloud providers isn’t trivial, but some of the most promising cloud technologies under development right now, such as containers, Kubernetes, and serverless technologies, are being designed to make that process much easier.

Jassy has downplayed talk of a spin-off before, arguing that customers like Netflix, which competes directly with Amazon Prime Video, know they won’t be treated any differently than Amazon itself.

AWS is a separable business with a different customer base than our consumer business and with a different leadership team. Amazon’s consumer and retail businesses are big customers of AWS, which has been unbelievably helpful to us, because we have very high quality, very capable, highly demanding internal development teams that are not shy about giving us feedback constantly. They’re always pushing the envelope.

But in a way, those comments actually makes the case for a spin-off: if AWS “is a separable business” and treats Amazon like any other customer, why should they remain joined at the hip if AWS’s association with Amazon has the potential to hurt its business? I don’t doubt that AWS treats its customers the way Jassy outlined above, but Walmart and Target aren’t backing away from AWS because of anything AWS did.

Don’t expect anything to happen until AWS actually feels the pain of customer defections to cloud rivals, and there’s a solid chance that won’t happen for a long time given the growth that still lies ahead for cloud computing. But if more companies follow the lead of Walmart and Target, its remarkable 10-year sprint to the head of the cloud computing pack might start to slow down.

And if it gets to that point, Bezos faces a Day Two question: Does he bite the bullet and set AWS free to dominate enterprise computing for the next decade, rewarding shareholders who financed its growth? Or is AWS so valuable to the overall business goals of Amazon that it’s worth suffering the defections of fed-up customers to Microsoft, Google, or others?

Most likely, AWS customers will make this decision for him. AWS is a technical marvel that has set the agenda for cloud computing for a very long time. Should customers rocked by Amazon’s relentlessness decide they no longer need to hold their noses in order to access those tech chops, something’s going to have to change.